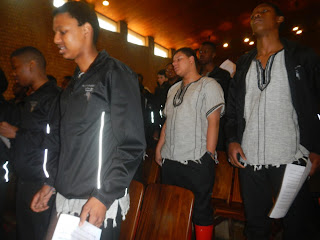 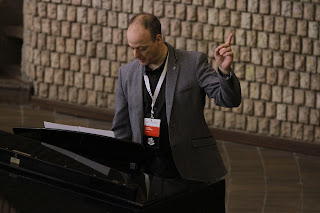 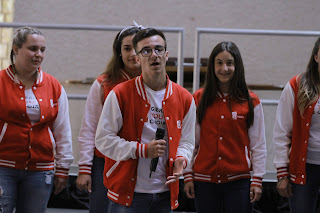 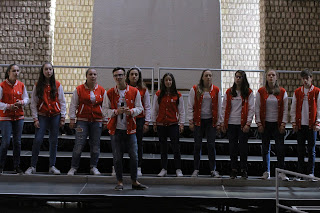 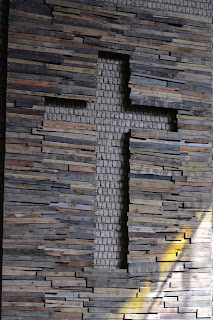 After last night the boys were struck by the enormity of the World Choir Games and arose with a new determination to tackle rehearsals seriously. A bit of free time in the morning allowed the boys to catch up on some sleep, practice gumboot routines and have some family time. We left the hotel at 09:45 and headed for the NG Kerk near the Tukkies campus to meet the other choirs assigned to our Friendship group – A Greek Youth Choir, A girls’ high school choir from Kuils River in the Cape and a choir from Nigeria.

To start off, one of the judges of the WCG played a warm-up game with the choirs which became quite complex but they all managed admirably!  Then the four choirs joined voices to craft the singing of Hallelujah. Then each choir performed some of their repertoire for the other three choirs and an audience, which consisted mostly of choir parents and supporters.

Then we went on to Pro Arte for an outdoor practice for four hours. The boys headed straight for supper at Spur. Seeing the happy birthday sparklers, the boys decided it was Mrs Govender’s birthday – so the ice-cream arrived with a sparkler and balloon and the accompanying jingle - which the boys had picked up and they added to the swell of noise. It was their way of saying “Thank you” to Mrs Govender for keeping them in line.

Some boys chose to return to the hotel while others travelled to the WCG Village. They returned straight away as most choirs were resting for competitions tomorrow or performing at concerts. Medication and a compulsory Vitamin C ‘fizzer’ was handed out and the boys were sent to bed after roll call.