The boys felt short-changed as we left Grahamstown at 08:40 in the morning as a group of young ladies from KZN South Coast had moved into the Victoria Primary School Hostel on Monday afternoon. Mrs Govender sat sentry duty in the passage wrapped in her blanket. The boys were set to determine her staying power and she outlasted them all!

An hour and a half journey saw us arrive at the Port Elizabeth Airport. Check-in was an organised and quick affair and we then had an hour in which to have something to eat and then proceed though security. The plane was slightly delayed and was filled mostly with the Kearsney College Choir. 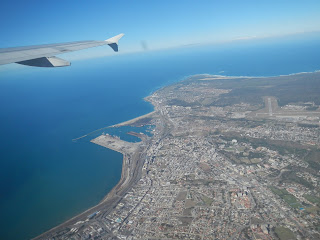 The short flight ended with the boys singing Shosholoza and serenading the passengers as they left the plane. A lady who had returned to South Africa to visit family, was moved to tears to hear the boys sing.

The bus and trailer were packed in relatively short order and after about an hour we arrived at our City Lodge Hotel in Lynnwood, most conveniently situated near to World Choir Games venues and also very comfortable accommodation. Mr Alborough and Mr Lombard went to Tukkies to register and receive our armbands, which give us permission to enter WCG venues, while the choir travelled to Pro Arte Alphen Park, which is our practice venue, where the matric boys ran a successful movement rehearsal.

We then met up at Huckleberry’s Restaurant in Magnolia Dell where we enjoyed a delicious meal of either fish and chips, or steak and chips or half chicken and chips with salad on request. Mrs Govender conviscated cellphones that were in use when they were instructed to talk to each other and not look at their phones! We then returned to the hotel where the ‘pharmacy’ opened to dose the sick boys- mostly tonsilitis and flu now with the last few with stomach cramps and nausea.  Then bed….