Today saw the boys involved in a full day of rehearsals of Scenic Pop, Music of Spirit and Faith and to end the day Scenic Folklore.  The boys broke down every move and reconstructed it to ensure precision of movement and timing. 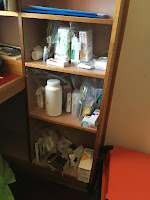 Lunchtime was a walk to Browns restaurant – with a detour to Grahamstown Pharmacy, where the pharmacists are beginning to recognise me!  True to form a bout of diarrhoea and vomiting has broken out among the boys – the threat of a suppository has many boys widening their eyes in horror!  One of our Kearsney parents who is a doctor, and who is currently in Grahamstown, kindly offered assistance in the form of advice of the best over-the-counter-medications - which I shall get from the friendly pharmacists tomorrow. 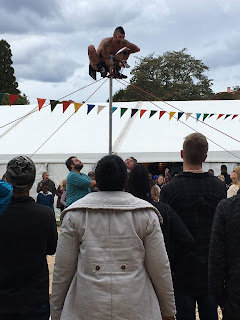 The boys returned to Victoria Primary school after lunch and a bit of free time and ventured out onto the school’s field which is Grahamstown’s Village Green for the duration of the National Arts Festival.  There, a lucky few, witnessed a visiting contortionist from New Zealand who threaded himself through the head of a racket (and toilet seat!), before performing a juggling (with machetes) act on a pole supported by ropes held by spectators. There are three or so large marquees which house a very interesting market where a variety of good-quality products are sold.

The boys rehearsed until 5:30 after which there was about a kilometre and a half walk to and from our supper venue at the Rat and Parrot. The boys enjoyed a filling meal of a giant burger and chips and the sure favourite; dessert called most appropriately – Chocolate Nemesis!  Liam Hobden dropped in with his parents to see his brother and to update the staff on University life at Rhodes and the community service ventures he has been involved in during the holidays. The Hobdens have been most generous with their time and vehicle in assisting the staff putting up advertising posters for the concerts, ferrying bottles of fresh water to the hostel and delivering the musicians to a sound-check at the Thomas Pringle Theatre where we are to perform tomorrow.

A quick walk back to the hostel followed – with Mrs Govender and Mrs van den Aardweg laden with pizzas and pudding for the souls who were ill or at the sound check – another last rehearsal followed where after the boys received instructions for Saturday’s back-to-back activities and engagements.  The boys were sent to bed to get a good night’s rest. 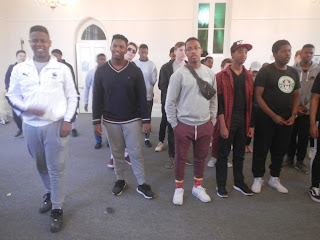 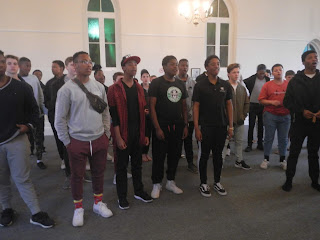 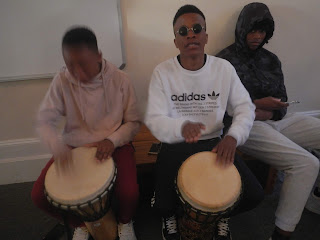 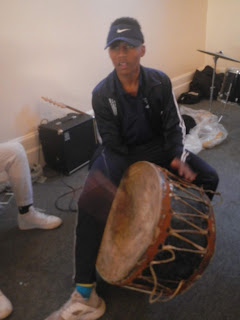 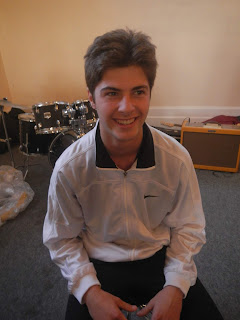