A later than expected breakfast at 8:30am ensured the boys were well-rested in preparation for a long day of rehearsals. Medication was required as the normal series of aches and pains were revealed. The pharmacy in my room at the boarding house is almost as well-resourced as any I have seen in the town!


A long scenic folklore rehearsal saw the repertoire slick and improved and a welcome lunch of burgers (a choice of chicken and beef of course) met the boys on arrival at Oscars - a quaint little house about a fifteen-minute walk from the boarding house.

An hour and a half of free time followed lunch where the boys were entertained by some of the entertainers who are now converging on Grahamstown for the annual Arts Festival on the Village Green, on Victoria Primary School’s grounds (very convenient for our boys). Three boys kept their appointment with the hairdresser!

A productive two-hour Scenic Pop rehearsal rounded off the afternoon. After a fifteen minute walk under the full moon we arrived at the Rat and Parrot – a favourite hangout of the Rhodes students during term time. The boys were excited to watch a World Cup soccer match on a big screen, set up especially for them, in a back room.

We all walked back for the last rehearsal of the day to practice the Scenic Pop repertoire. The boys spent a productive day polishing their WCG offering and are working towards their first performance at the National Arts Festival on Saturday. 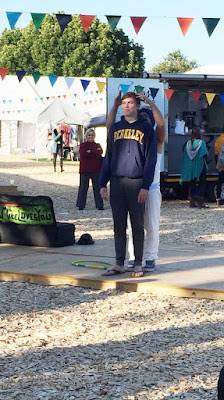 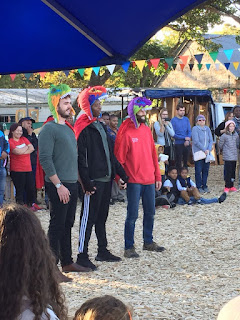