Wednesday 27 June - off to Grahamstown

It is quite possible that Wednesday 27 June will be ‘the longest day in History' for the Choir. Dawn had not even thought about opening her eyes at 3:30am as the Choir made their way from Haley House to the bus, parked in the shadows, at the music block. The hold of the bus was soon filled with luggage and the boys had to be precision packed to fit them, their luggage and breakfast packs into the available space. The boys fell silent on the trip to the airport where the bus finally disgorged its sleepy cargo. Ms Brigette Oakes had each teachers' group files so well organised that the check-in went smoothly except for a bag that lost its contents due to ‘zip failure’. Thank goodness for plastic wrapping which provided a temporary solution!


A short one-hour flight saw us land in the windy city of Port Elizabeth where two buses (and soon thereafter, a trailer!)  awaited the Kearsney team. A quiet 1 ½ hour drive followed and we arrived in Grahamstown and the Victoria Primary School boarding facilities where the boys soon began settling into their assigned rooms. After a short walk in the cool air of Grahamstown, with some donkey-dodging, we arrived at our lunch venue, Browns restaurant, where a welcome pre-ordered meal was awaiting us.

After lunch a few boys who were identified as needing a haircut were left behind with Mrs van den Aardweg to sort the matter out. Thankfully “Hair and Beauty on High” was prepared to attend to the nine boys as ‘walk-ins’, without an appointment. Four hours later we left the salon after an interesting afternoon where the fascinating skill of braiding and crocheting dreads was observed and the finished product admired.

The Choir had an extremely productive four-hour rehearsal in the orchestra room at the venue where we are resident, which has been so helpful and convenient. We had another five-minute walk in the darkening sky to our supper venue, Saints Bistro on High Street. A three-course meal and cold drink was welcomed by the boys and staff.

On our return to the boarding house the boys were relieved to learn that there would be no evening rehearsal and that lights-out was set for 10:30pm to allow them a long rest for Thursday’s activities. 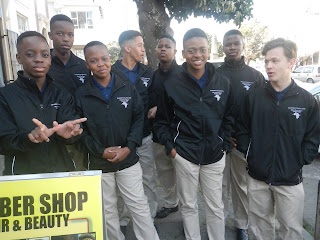 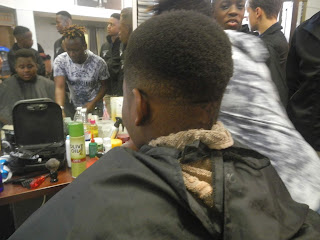